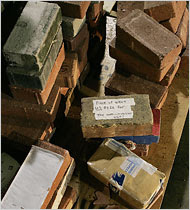 The opening of a NY Times article about Americans sending bricks to Congress in support of tougher borders:

Score! Here’s more from the article:

Advocates of tougher border security have sent thousands of bricks to Senate and House offices in recent weeks to make a none-too-subtle point with lawmakers about where many of their constituents come down on emerging immigration bills.

Leaders of the campaign, which has delivered an estimated 10,000 bricks since it began in April, said they had hit on the idea as a way to emphasize the benefits of a fence along the border with Mexico.

Wow: 10,000 bricks? Methinks the biggest winner in this campaign may be the U.S. Postal Service.
Posted by Eric at 10:34 PM
Email ThisBlogThis!Share to TwitterShare to FacebookShare to Pinterest