The Economist: Good news spells trouble for the Democrats 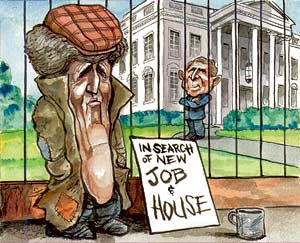 And yet, by so many measures, life in the United States shows steady, material improvement. Americans, on average, spend less of their lives at work than ever before. Companies are indeed making record profits and, in recent months at least, have grabbed a bigger share of the national pie. Yet household income is growing, and American private wealth is also at a record, standing at $44 trillion, give or take. And though the chances of finding a new job are lower, the chances of losing your job in the first place are less than during the boom of the 1990s.

But what about that evil outsourcing?

Many people will buy none of this, and the one irrefutable concern that has grabbed Americans' attention this year is the flood of jobs going overseas. Now, if your textile mill in West Virginia closes down, that is very bad news indeed for you and for your community. But at the national level, more jobs are outsourced to America than the other way around. American workers, in other words, are net beneficiaries of outsourcing (it goes without saying that consumers always were). And in the cross-border trade of white-collar services, a chief concern, America's surplus with the rest of the world is not shrinking; it is growing.

OK, how about all of those manufacturing jobs?

Time, then, to think the unthinkable: a recovery in manufacturing jobs. There are reasons to believe one may be under way. The beneficial effects of a cheaper dollar are starting to be felt, with output climbing. A closely-watched survey by the Institute for Supply Management reports hiring among manufacturers at a 16-year high (though the government's employment report still paints a less robust picture). Firms appear to be rebuilding their inventories, and they will presumably need to hire more workers to do that.

John Kerry is going to have to get Teresa to lay off some ketchup workers to prop up jobless claims.
Posted by Eric at 4:30 PM
Email ThisBlogThis!Share to TwitterShare to FacebookShare to Pinterest