Fire up the teleprompters 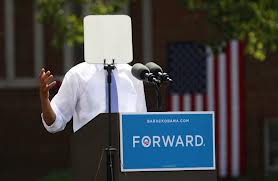 Wall Street Journal: "Obama to press plan to revive the economy."  Seems to me that should have been on your "to do" list four years ago, champ.

More - Opinion Journal: "Mr. Obama was elected first and foremost with a mandate to fix the economy. Yet when he found himself by rare confluence of luck with 60 votes in the Senate, he put nurturing a fragile recovery secondary to the pursuit of pent-up liberal social policies."

Snap review - This was Obama's speech from 2008: it was full of "we're gonna do this and that" and "the path forward" and "we should choose this way forward" as if he hasn't been President for four years.  There wasn't a hint of a mea culpa for record debt, unemployment, and food stamps.  Well, that may not be true: I think he said things have been tough so he fell to his knees just like Lincoln.  Because he was a President too and therefore a great man.

And, dear Lord, the pandering.  This election isn't about me...it's about you!  Because you're marvelous.  It's you who are the hope.

Finally, as I predicted, there was nothing on entitlement reform, which will swallow the entire budget in 23 years.  Instead it was snark, small-ball, smarmy smiles and straw men.  I can't imagine independents and undecided voters would buy into this.

And this - Charles Krauthammer just called it the "emptiest major speech" Obama's ever given.  Now Joe Trippi is saying that Joe Biden's speech was better...literally.  Gee, maybe they should have brought Clinton out again.

Finally - I need to go to bed but a lot of the adjectives I'm hearing are "flat" or "resigned" or that Obama seems "weighed down."  And I have to wonder: did Obama see some bad news in tomorrow's job report?  The consensus report is something like +120,000 jobs with the unemployment rate staying at 8.3%.  Hmm.
Posted by Eric at 8:52 PM
Email ThisBlogThis!Share to TwitterShare to FacebookShare to Pinterest

Obama: "FREE LUNCH FOR EVERYBODY"
Romney: "TANSTAAFL" (There ain't no such thing as a free lunch)

* UYELOTTTAFSBDWFTTDRS
Unless you're eating lunch on the taxpayers' tab at Four Seasons. But don't worry, folks, that'll trickle down real soon.