When you've lost the New Yorker...

Unintentional hilarity ensues at the New Yorker in "Obama's old friends react to the debate."  (Hat tip: Twitchy).  Essentially, O lost the debate because he's just too wonderful for us mere mortals to fully grasp his wonderfulness.  The comments are a collective eye-roll:


Lawrence Tribe tells us that "...Barack Obama’s instincts and talents have never included going for an opponent’s jugular." False. Obama is perfectly delighted to go for an opponent's jugular - when that opponent is unable to respond. See, e.g., Obama railing about the Citizen's United decision at a State of the Union speech - in a highly sharp & personal manner - secure in the knowledge that the members of the Supreme Court in the audience were unable to respond (and had to endure Senators jumping up around them, cheering like idiots); Obama's demagogic attack on Paul Ryan, during a speech in which Ryan - a guest invited by the White House - sat mute, without the opportunity to respond. So Obama is a very enthusiastic verbal warrior, except when he encounters an actual opponent. Another thing about President Obama: He's not particularly smart. He's ideologically inflexible & intellectually incurious. That's why he lost the debate with Romney so decisively, and that's why David Remnick's feelings are now so hurt, causing him to spin unconvincing rationalizations about what a sensitive guy this Obama chap is.

Yeah, remember Obama's blistering "social Darwinism" speech delivered as Ryan sat a couple feet away?  Obama could have toned down the rhetoric but, you know, the speech was already loaded into the Teleprompter - whadda ya gonna do? 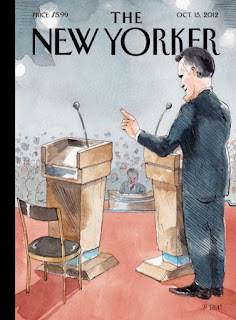 The chair would have been better.
Posted by Eric at 2:17 PM
Email ThisBlogThis!Share to TwitterShare to FacebookShare to Pinterest