The Administration's curious locution on Benghazi

Am I the only one that has noticed that officials in the Obama Administration have employed a strange non-denial in statements on the Libya debacle?  Here's CIA director David Petraeus:


No one at any level in the CIA told anybody not to help those in need; claims to the contrary are simply inaccurate.

And here's the White House:


Neither the president nor anyone in the White House denied any requests for assistance in Benghazi.

Take note that denying "denying requests for help" is not the same as "sending in help."  Why doesn't anybody in the White House say: "Hell, yes, we told them to save those guys!"  Instead we're left to conclude that the Commander-in-Chief didn't say "no" but he didn't say "yes" - in other words, he said nothing at all, which allows these weasel words to stand-in as "truthful."

If we had a real media instead of a bunch of lapdog note-takers, the press would be asking: "Was a Presidential directive made to save the ambassador in Libya?"  Follow-ups: "If not, why not?" and "If so, why wasn't that order carried out?"  We know from Obama's schedule that Defense Secretary Leon Panetta was at the White House as the attack in Benghazi was starting.  We also know that as the assault was reaching its fatal conclusion, Obama was chit-chatting with Benjamin Netanyahu for an hour. 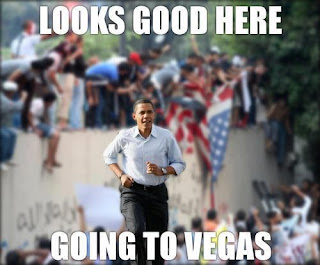 More - Senator Ron Johnson: "Let's face it. What was the president doing, during those seven hours? Did he give that directive? Or didn't he? Did Leon Panetta directly defy him? I mean, what happened?"  Yeah, what happened?  We don't need a full investigation to state facts.
Posted by Eric at 9:49 PM
Email ThisBlogThis!Share to TwitterShare to FacebookShare to Pinterest