Unclear on the concept

First, a flashback to this headline: "US ranks last among 46 countries in trust in media, Reuters Institute report finds - Just 29% of people surveyed in the U.S. said they trust the news, compared to 45% in Canada and 54% in Brazil."
Have no fear, because the (checks notes) New York Times is on a mission to restore faith in the news.  Vanity Fair: "Crisis of Trust in the Media: Inside A.G. Sulzberger's Top Times Project"

“The media in general and The New York Times in particular have taken a lot of shots in recent years, and every poll will tell you that the media is not trusted,” one source said. “How do we, in this era of so much distrust in the media, show the rigor we use in preparing our report to sort of win people over?"

"The fact that we have a Supreme Court reporter who’s a lawyer, or that we have a medical doctor writing about COVID—we know that stuff, but how do we get that across?” The other source familiar with the project said, “It’s about ensuring that people understand how and why we do what we do.” And crucially, that this sense of understanding transcends the Upper West Side, or any other stereotypical Times constituencies. “This work, more broadly,” the source said, “will hopefully resonate with right of center people, centrists, left of center people—a lot of the work is just to ensure people understand what the Times does.”

So it looks like the plan here is an appeal to authority, with their lawyerly Supreme Court reporter, and not to consider the viewpoints of Americans in flyover country.
The last Republican candidate that the New York Times endorsed for President was Dwight Eisenhower.  A lot of Americans already understand how and why and what you do.
Extra - Remember this NYT gem from four days ago?
And this: 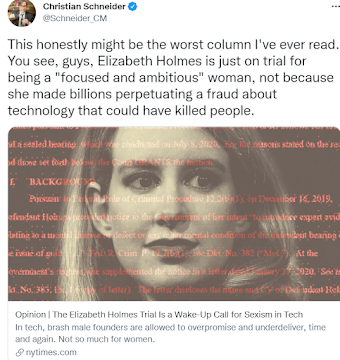 Posted by Eric at 8:23 PM
Email ThisBlogThis!Share to TwitterShare to FacebookShare to Pinterest

*Greed (for one of their rightwing biases to attain credence via one of those vindicating "See? Even the New York Times agrees that..." articles)

The Washington Post just announced a major hiring & coverage expansion today. Taking down the media is the second conservative "lost cause."

Q: Who's the highest paid person at the Washington Post?

Imagine how much more the Washington Post would be expanding now, if not for that payout?