Aside from handling the border crisis, Kamala Harris was given the job of moving the "For the People" act through the Senate.  She botched it.  And I'm not saying it was easy but it would have been a moral victory to peel off a single Republican and call it a bipartisan win.  Instead, it's obvious that Kamala backed away from her assignment and did absolutely nothing. 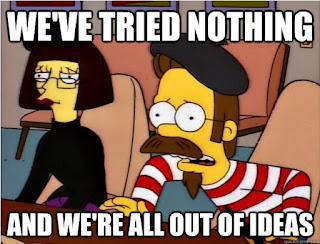 Hot Air had an article this morning about how the Left is noticing that Biden and Harris don't do much:

Did progressives even notice how Biden and Kamala Harris campaigned for their jobs last year? Biden restricted himself to tightly controlled appearances with very few people in attendance, and Harris didn’t get out much more than that. At the time, we assumed this was a political version of Mohammed Ali’s “Rope-a-Dope,” forcing the media to cover Trump rather than Biden. Strategy or not, it succeeded.
Since inauguration, however, Biden has barely changed this strategy — hiding from the media until forced into the open. It took more than two months for Biden to hold his first open press conference, and then didn’t do another until his G-7 trip and summit with Putin last week. He’s back in the White House now and hasn’t popped out to test his shadow since. It’s not that Biden and Harris aren’t using their bully pulpits to lead on the progressive agenda — it’s that they’re not leading at all.

Joe is an old dude.  What's Kamala's excuse, other than her unalloyed ineptness (see: her campaign.)?  She's just so bad at her job.
Posted by Eric at 8:01 PM
Email ThisBlogThis!Share to TwitterShare to FacebookShare to Pinterest