Not ready to go

The Hill: "Fox's Stuart Varney: 'The Republican Party is a disgrace'."


“I personally believe at this moment in time the Republican Party is a disgrace,” Varney declared during an interview with Juan Williams, a Fox News and The Hill contributor. "I’m serious. I am serious.”

“We elected the Republicans who run the House, the Senate, and the White House and the very, very first thing that comes up on the legislative agenda they vote no, they’re split. They can’t do it. They can’t govern. I am really fit to be tied."

Hard to argue with that.  I was going to embed "Send in the Clowns" but I already used a YouTube video today.  It would be easy for me to blame Trump who forced a vote in Congress before the requisite support was assembled, probably because he thought he understood how to make a "deal" in Washington.  But Paul Ryan, who certainly understands how hard it is to ratchet back entitlements, never sold the public on this bill and it was easy for Republicans to walk away from both the legislation and a President they don't particularly like.

This whole endeavor has been...the review for this album: 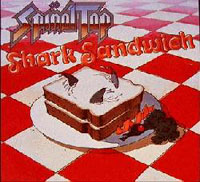 Posted by Eric at 7:06 PM
Email ThisBlogThis!Share to TwitterShare to FacebookShare to Pinterest