Finally - finally - they made a musical of "A Christmas Story" which is guaranteed to win a major award.  NY Times: "That wish for a BB gun, set to song and dance"


Based on the 1966 book “In God We Trust: All Others Pay Cash” by the humorist Jean Shepherd, “A Christmas Story” has been embraced by fans for its tale of a late-Depression-era Christmas and a boy named Ralphie with a wish for a BB gun. Years of repeated reruns on television since its 1983 release have given it pop-culture cachet. The house in Cleveland where parts of the film were shot is now a museum. There are “Christmas Story” underpants and ties. A 2000 play version continues to make the regional theater rounds.
Now “A Christmas Story” has been turned into an almost $5 million musical. It’s currently on a five-city tour, with hopes to build a holiday franchise in whatever location it plays. 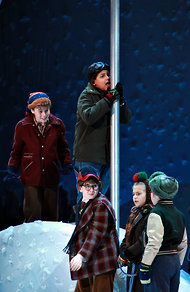 Stick around, Flick!  It's going to make "West Side Story" look like...a football.
Posted by Eric at 7:02 PM
Email ThisBlogThis!Share to TwitterShare to FacebookShare to Pinterest