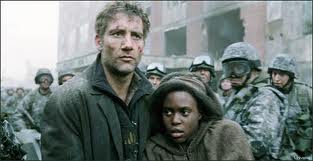 "Keep that kid safe - we need him to pay off the national debt."
Here are some stories that fit together. First, the San Francisco Chronicle reports that the average city pension in San Fran pays more than the average worker earns. At least there are plenty of jobs to pay taxes.
Not so fast: Companies leaving California in record numbers. Well, at least there will be a new generation of people to support the pensioners.
Not so fast: "San Francisco losing kids as parents seek schools, homes"

New census figures show that despite an intense focus by city and public school officials to curb family flight, San Francisco last year had 5,278 fewer kids than it did in 2000.
The city actually has 3,000 more children under 5 than it did 10 years ago, but has lost more than 8,000 kids older than 5.
Just 13.4 percent of the city's 805,235 residents are younger than 18, one of the smallest percentages of any city in the country. In 1970, those younger than 18 made up 22 percent of San Francisco. In 1960, they made up 25 percent.

A pension fund bankrupting a city? Why, that couldn't happen in America.
Posted by Eric at 9:11 PM
Email ThisBlogThis!Share to TwitterShare to FacebookShare to Pinterest

Last week, the same reporter wrote that San Francisco's pension fund solvency is "the envy of other localities."

Also, SanFran's fund is structured to amass profit on investments, with system projections of 40 to 80 years. We've been urged by Republicans to divert our Social Security money into the investment market, because over the long haul, it's impossible to lose. So which is it?

I know two things when it comes to supporting long-term civil obligations: they depend on job growth and population replacement. San Francisco is heading in the wrong direction on both.

Which devastating trend is the more insoluble: a drop in children which may already have reversed (the under-5 category is up in greater proportion than the older group is down)? Or the Worst Rate Ever! for companies fleeing California in "record numbers" (based on an incomplete tracking system that's been in place since 2009)?

As for American bankruptcy precedents for San Francisco, one might want to aim a little bigger than Prichard, Alabama. That town's 27,000 population is one-third the size of a single San Francisco 49ers crowd. I suspect San Francisco has one or two financial options that Prichard might not.

"Which devastating trend is the more insoluble: a drop in children which may already have reversed (the under-5 category is up in greater proportion than the older group is down)? Or the Worst Rate Ever! for companies fleeing California in "record numbers" (based on an incomplete tracking system that's been in place since 2009)?"

This is a fine example of the mental gymnastics required of the secular religion known as liberalism/progressivism.

Eric's comment is an example of looking at facts, and acknowledging reality.

Personally, I note the difference.

Those things you hand wave away are, you know, also facts. They're right there, within the same links.

Personally, I note the difference.

I'm sure you and your facts will be very happy together. Keep them far away from the bad facts.