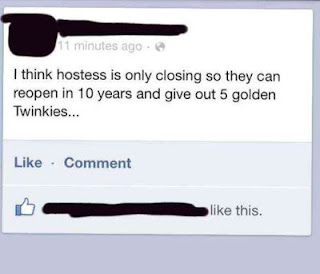 Posted by Eric at 9:27 PM
Email ThisBlogThis!Share to TwitterShare to FacebookShare to Pinterest

I think they are closing because the namebrands and formulas are worth more at auction than they are at a factory constrained by multiple union contracts.

They've already agreed to go to arbitration. But if Hostess were unable to remain open, it would be because of the substantial debt the company has incurred, which is independent of worker costs (which were just cut in 2009).

Nevertheless, and notwithstanding the facts... UNIONS! GRRRRR!!!