Hit & Run: "Why the sequestration cuts shouldn't be part of any larger fiscal cliff deal-making"


There should be absolutely no room for negotiating away the pathetically small amount of spending reduction the government imposed on itself to raise the debt-ceiling by $2 trillion. For god's sake, we're talking about trims of around $110 billion annually. The 2013 budget alone will spend about $3.8 trillion and using constant dollars, federal spending has increased 50 percent over the last decade...
If such tiny, wafer-thin cuts cannot in fact be enforced, then we should simply give up now and really max out the credit cards and party like there's no tomorrow. Seriously, go ahead and just finish the whole tub of ice cream already.

We're slashing to the bone here: 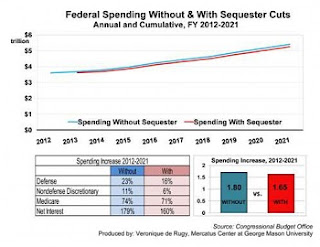 I hope we can get by with such Spartan spending levels.
Posted by Eric at 6:20 PM
Email ThisBlogThis!Share to TwitterShare to FacebookShare to Pinterest

This "fiscal cliff" story is on every news program, yet no one in our corrupt media comes close to reporting the actual numbers in their full context. I guess the actual size of the "cuts" in relation to our total spending isn't scary enough to generate ratings. Or maybe spending is just sacrosanct.

But shame on the Republicans for not explaining this situation properly. These sequestration cuts are like making a tiny sliver of a minimum payment on a credit card for one month. I think people would understand and be more sympathetic if the case was actually made.

Then again, maybe the GOP doesn't favor limited government either. They may not be as reckless as the Democrats, but they still helped run the debt up in the first place.

Sorry for the rant, but this post hits the nail on the head.