The Atlantic under water

Legal Insurrection: "Report: ‘The Atlantic’ Has Lost Tens of Millions of Dollars, May Not Turn a Profit Until 2023" - "According to NBC News, “[Editor-in-chief Jeffrey] Goldberg has privately expressed fear that Powell Jobs and her organization, Emerson Collective, might pull the plug if the magazine doesn’t reach profitability within the next four to five years, Atlantic sources said."
As a former subscriber, let me tell Jeffrey Goldberg where The Atlantic lost its way.  Here is a cover from the Atlantic from 2014 back when they wrote interesting stories: 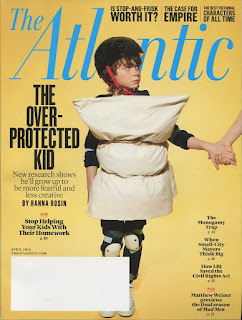 I remember this story so distinctly as it described scheduled play dates and helicopter parents, and the long-term effects of children dependent upon their parents for socializing and conflict-resolution.  It's the kind of story that appeals to a wide audience, relevant, measured, and topical.
Then Trump won the Presidency and The Atlantic went full retard.  Here are just a handful of cover stories they featured:
"The Trump Presidency: A Damage Report"
"How American Politics Went Insane"
"Can Satire Save the Republic?" (with an Alec Baldwin cover)
"How to Build an Autocracy"
"Is Democracy Dying?"
"How to Destroy a Government"
and, of course: "Impeach."
Those were just the covers, but every issue had the same drumbeat that never changed.  Even if you agreed with the magazine, it was a crushingly monotonous bore.
Posted by Eric at 9:05 PM
Email ThisBlogThis!Share to TwitterShare to FacebookShare to Pinterest

Not that it matters, but this blog post from nearly 15 years ago describes why I gave up on the Atlantic.

I liked Iowahawk's tweet: "I'm no Henry Luce, but I think I could operate a magazine full of B+ Oberlin term papers for less than $50 million per year"

I used to subscribe to Harper's magazine and they did the SAME thing: great essays and articles were supplanted by nothing but Orange Man Bad.