This outcome was foreseen ten months ago

Patrisse Khan-Cullors, the leader of Black Lives Matter and a self-described Marxist, recently purchased a $1.4 million home in an exclusive Los Angeles neighborhood where the vast majority of residents are white, according to reports.
The home, which features three bedrooms and three bathrooms, is nestled in Topanga Canyon and has a separate guesthouse on the property, according to a celebrity real estate blog which reported the transaction last week

Ten months ago, Reddit hosted an "Ask me Anything" with the managing director of Black Lives Matter.  This session was unintentionally comical because of how this person absolutely refused to answer a single question about the financial transparency of BLM.  You knew it was only a matter of time before all that fat cash started showing up in fancy homes, cars, and jewelry. 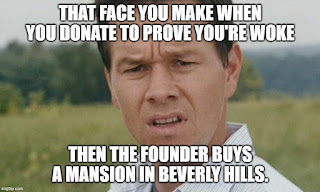 Posted by Eric at 9:31 PM
Email ThisBlogThis!Share to TwitterShare to FacebookShare to Pinterest