Six schemes and stunts to solving Social Security's solvency
The New York Times featured a roundtable discussion on Social Security and invited six experts to discuss possible solutions to extend the program's long-term solvency. Curiously, I was not notified.

Monique Morrissey from the Economic Policy institute kicks off with the "LeBron James should pay more" argument. Cause, you know, he's rich! What's another million to him? As I've noted many, many times before, Social Security is a system in which Americans receive a benefit roughly proportional to the taxes paid in. It's a universal system, possibly the only one left in government and FDR set up the system with a tax/benefit cap because he knew Americans wouldn't stand for John D. Rockefeller receiving a big check every month.

Ms. Morrissey, however, seems to suggest that LeBron will get that big check: "Next year, people like Mr. James would pay slightly more than they pay now while eventually receiving slightly higher benefits." To which I respond with an eye-roll: "yeah, right." The political pressure to rob LeBron James of his enhanced benefit upon retirement would be too great for any populist politician to ignore. Call it the "Paris Hilton benefit" and you're done.

Next, Estelle James of the National Center for Policy Analysis writes that we should adopt "Chile's Way." I need to brush up on my Chile system, but it seems that it's like a 401(k) system administered by the government. Most importantly, it doesn't punish retirees for continuing to work past 65:

Chile has a public retirement system, but after retirement age - 65 for men, 60 for women - people who keep working are no longer required to contribute to a pension fund. This increases their net wages, strongly encouraging them to continue working. Since 1981, when Chile put the system in place, labor force participation rates for men ages 65 to 70 have risen 13 percentage points.

It's long been my position that Social Security was meant to help elderly workers who could no longer do the labor of the Depression era. We're not a nation of ditch diggers and washwomen anymore. The government has set up a system where (with today's life expectancies) we subsidize a third of a lifetime in retirement.

Congressman Ted Deutch (D-FL) panders to his constituency with "Keep up with retirees' costs." This is a non-starter, unworthy of review.

On the more serious side on the fiscal argument, Harvard professor Robert Pozen proposes "Cut benefits, but do it fairly." This plan involves progressive indexing where richer retirees would have their benefits cut because they've already saved quite enough in 401(k) or IRA plans. The obvious counter argument here is that this is the classic "Grasshopper and the Ant" moral hazard scenario. Plus – once again with feeling – it ends Social Security as a universal plan and turns it into another welfare program.

Former Treasury official Bruce Bartlett urges an increase in the retirement age in "62 is too young." Bartlett focuses on the scaling of benefits depending on the retirement age but I prefer raising the age to 70 because, once again, Americans are living so much longer than in the 1930's and manual work is not the same as 80 years ago.

Finally, NY Times columnist Roger Lowenstein suggests we need "Plenty of young people." Sandwiched between a mountain of snark for people like me who are crazy enough to think Social Security is a bad deal for future generations (pssst! It is!) Lowenstein suggests we just need to lighten the demographic load with massive immigration:

We should also make use of a perfectly legal way to steal other societies’ young people - by legalizing undocumented immigrants and permitting more immigration. It would be a foolproof way to lessen the actuarial load. In contrast, societies that go the closed-door route (see Japan) guarantee that their own citizens will be working overtime to support Grandma and Grandpa.

That last bit is straight out of Mark Steyn's "America Alone." Steyn would be one of those demographic-crazed nutcases that Lowenstein so desperately would like dismiss if it weren't for all his inconvenient facts and statistics.

Unfortunately, nobody – even as a joke – said "Soylent Green." 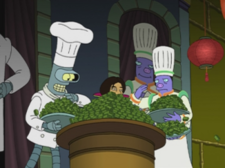 Extra - In case you missed it, here's a roundup from last week.
Posted by Eric at 8:39 PM
Email ThisBlogThis!Share to TwitterShare to FacebookShare to Pinterest

Ponzi schemes never work EXCEPT when run by politicians.
Write that on the blackboard 1000 times.
(Wow, does that give me away)

They just go on longer and lose more money when the government runs the Ponzi scheme. And the guilty don't go to jail.