The Bee is Patti Labelle

Oh, NY-14, why did you elect such a dummy?  Fox News: "Alexandria Ocasio-Cortez slammed over anti-Amazon push in New York City billboard: 'Thanks for nothing'." 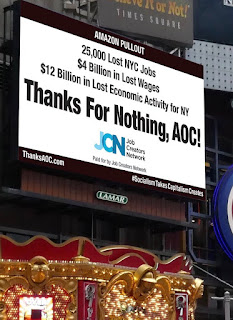 Posted by Eric at 9:50 PM
Email ThisBlogThis!Share to TwitterShare to FacebookShare to Pinterest

story is she spent $10,000 on office products from Amazon -- did not find somewhere to buy locally in her district, then ran Amazon jobs out of town. She is a genius.

A first-term Representative, who is unconnected with the Long Island City Amazon location that's a couple of districts away from her own, and who had no role whatever in blocking it, is being credited with singlehandedly killing the deal? That is a formidable foe.

Just imagine what AOC might do, solely with her invisible mind ray powers, in Month Number Two!

Someone fails at both politics and math, and it isn't the woman who graduated cum laude from Boston University, majoring in international relations and economics. Politically, AOC has nothing to do with this, she doesn't run NYC government, it's not even her district federally. In Math, the $3 billion a year in subsidies could just be used by NY to employ the same 12,000 people for $250,000 a year, a lot more than Amazon was going to give them, and to do something productive for the city instead. Corporate welfare is not the way to go, let companies compete using capitalism, not state sponsorship.

"The Green New Deal will make it legal for grasshoppers to vote, and their votes will count twice."
--Alexandria Ocasio-Cortez
On dispelling myths about the Green New Deal

That's funny: I could have sworn Mayor DiBlasio was joining in the AOC criticism, too.

It's comforting to know that the $3 billion subsidy NYC was going to give to Amazon, can now be used for helping the people of the city, just as the federal government can now redirect much of that $700 billion that had gone to a Pentagon budget increase they didn't even request, now that she has heroically blown the whistle on it.

When you throw in the $21 trillion that will no longer be wasted in Pentagon accounting errors since her sharp eyes spotted it, that young lady is worth her weight in gold.

That's funny: I could have sworn Mayor DiBlasio was joining in the AOC criticism, too.


Comedy is never as funny when you have to explain it.


De Blasio did dispute AOC's math after the deal had already collapsed (singlehandedly disintegrated by her invisible mind rays).

I confess, I do like this James Bond supervillain persona the GOP has schizophrenically built up around Ocasio-Cortez. She's so dumb... yet so evilly brilliant!

"I want to buy $24 billion in pizzas. I have this $3 billion coupon".
"Get out of here with your evil, corporate coupon!" - AOC

"As a progressive my entire life — and I ain't changing — I'll take on any progressive anywhere that thinks it's a good idea to lose jobs and revenue because I think that's out of touch with what working people want," he said."

ALEXANDRIA OCASIO-CORTEZ WILL RETURN
in
GREENFINGER