I wish this movie had gone to the bottom of the Atlantic - My kids are watching "Titanic" right now and - I have to ask - is there a worse movie to win "Best Picture"?  The characters are so one-dimensional they wouldn't leave a shadow.  And, sweet Jebus, the hackneyed ending with the necklace.  Any one of the movies it was up against was better, especially "The Full Monty" and "LA Confidential."

All I can say by way of consolation is that the Academy saw their error and denied James Cameron a second Oscar for the equally-awful "Avatar."

For the record: "Goodfellas" was ripped off in favor of "Dances with Wolves" but that movie made "Titanic" look like "Citizen Kane."  There, I said it. 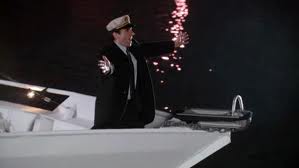 King of the world!
Posted by Eric at 9:28 PM
Email ThisBlogThis!Share to TwitterShare to FacebookShare to Pinterest

I saw all the contenders but The Full Monty and I agree with you. William Goldman captured a thought "You know how it ends but you still watch". The older actress made the movie for me and it was sad she didn't win an Oscar for the best role of her life